A Lion in Paris

A Lion in Paris is translated from French. A big, lonely, orange lion travels from his home in the grasslands to Paris “to find a job, love and a future.” He explores the city but disappointedly no one notices him. “More than anything, the lion liked to be noticed and he thought it was very sad to be ignored.”

Initially, he is not keen on the city but the more he explores the more it grows on him. “The city that had appeared so weary and frightening and grey in the morning now seemed to be smiling at him with all its windows.”

In The Louvre, he gets some much-needed attention. A girl, the Mona Lisa, admires the lion as he walks across the room. He settles in the city for good on the plinth where the real lion statue, at the Place Denfert-Rochereau, stands today. “This is the place for me.” 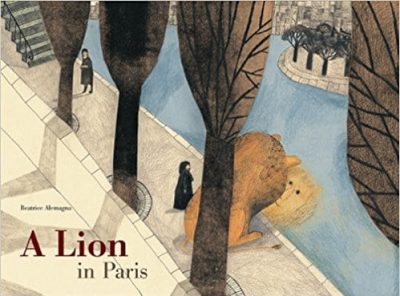 A Lion in Paris Resources