Anton and the Battle by Ole Konnecke

Anton and the Battle by Ole Konnecke is translated from German. The picture book focuses on relationship skills, responsible decision-making and self-management.
Anton bumps into Luke and a battle for dominance begins. They compete over who is the strongest, fastest and loudest. “I can carry a whole piano. I’m much stronger than you. And much, much louder!” says Luke. The sparring accumulates until Luke threatens to “drop a bomb.” Anton threatens to retaliate with a larger bomb as a small puppy enters the scene.
After all their demonstrations of bravado, the two boys hurriedly climb a tree. While waiting for the dog to leave the boys debate who is the hungriest and who can eat the largest cake. Once they are safe from the scary dog they rush home, competing over who can run the fastest.
Series: Anton Can Do Magic, Anton and the Battle 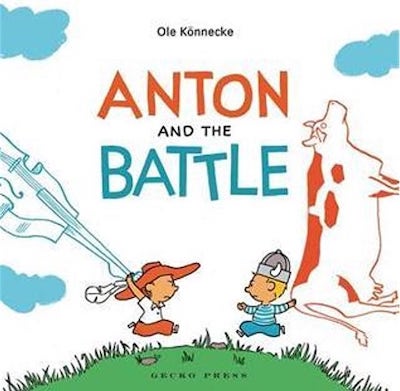 Teaching Resources: Anton and the Battle 122shares
We use cookies to ensure that we give you the best experience on our website. If you continue to use this site we will assume that you are happy with it.OkPrivacy policy