We Found a Hat

Title: We Found a Hat
Author: Jon Klassen
Illustrator: Jon Klassen
Publisher: Walker Books (2014)
ISBN: 9781406353433
We Found a Hat is the last book in Jon Klassen’s hat trilogy. The picture book promotes integrity, perspectives and responsible decision-making.
Two turtles look at a hat in the middle of a desert. As there is only one hat they leave it where they found it because “it would not be right if one of us had a hat and the other did not.” Their decision doesn’t stop the turtles, one in particular, from dreaming about having the hat for themselves. The tension and humour build in three parts, concluding with a spectacular ending.
Series: I Want My Hat Back (1); This is Not My Hat (2); We Found a Hat (3) 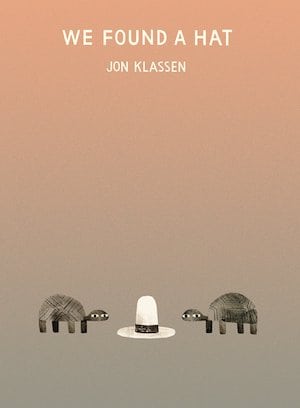