Julian is a Mermaid by Jessica Love is an uplifting picture book that promotes identity, creativity, self-awareness and open-mindedness.
“This is a boy named Julian. And this is his abuela. And those are some mermaids. Julian LOVES mermaids.” Travelling home on the subway train, Julian sees three spectacular ladies. Dressed for a parade in mermaid-like costumes their happiness is contagious. While abuela takes a shower Julian creates a mermaid outfit using yellow curtains and a fern plant.
He imagines swimming with sea creatures and transforming into a mermaid. He proudly shows off his design to his abuela. She pauses and Julian wonders how she will react. She adds beads to finish the outfit and takes him to the parade, joining others in their fabulous costumes. 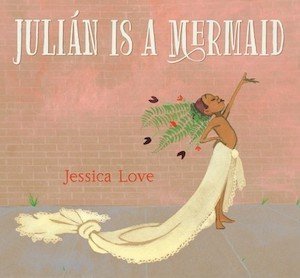 Teaching Resources: Julian is a Mermaid

The Children’s Library Lady has over 150 picture books on large variety of topics. You will find specific book, author and illustrator information, as well as resources. You can also browse themed books lists and explore all the books on the website. 39shares
We use cookies to ensure that we give you the best experience on our website. If you continue to use this site we will assume that you are happy with it.OkPrivacy policy