Title: Won Ton: A Cat Tale Told in Haiku
Author: Lee Wardlaw
Illustrator: Eugene Yelchin
Publisher: Henry Holt & Company (2011)
ISBN: 9780805089950
Won Ton: A Cat Tale Told in Haiku by Lee Wardlaw. This picture book promotes poetry, a sense of belonging, self-esteem and identity.
A cat narrates the story of its adoption in a series of haiku poems. It starts with its lonely life in a shelter waiting for someone to choose him. “Visiting hours! Yawn. I pretend not to care. Yet-I sneak a peek.” When a boy comes to the shelter the cat longs for him to choose him. “Latch squeaks. Door swings wide. Free! Free at last! Yet, one claw snags clings to what’s known.”
The poems illustrate how the boy builds trust with the cat, naming him Won Ton. After a life of fear and pride the cat reveals its real name. “Good night, Won Ton,” you whisper. Boy, it’s time you knew. My name is Haiku.”
Series: Won Ton: A Cat Tale Told in Haiku (1); Won Ton and Chopsticks: A Cat and Dog Tale Told in Haiku (2) 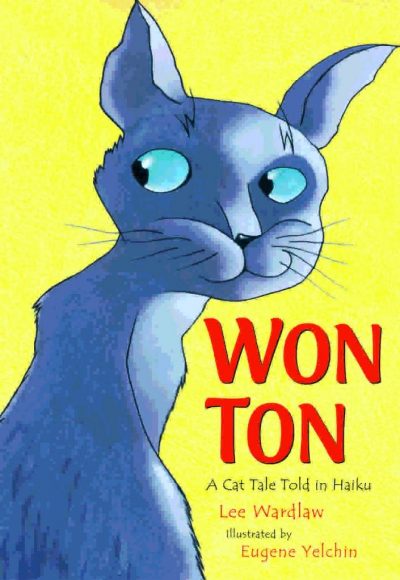